On 9 January 2004, the first version of UpStage was formally launched and released into the world as a platform for cyberformance (live online performance). A decade later, UpStage invite artists to join in celebrating this auspicious milestone and imagine what might come next …In January 2014, UpStage will be ten years old!

The birthday celebrations will include the launch of UpStage version 3, incorporating audio-visual streaming and many exciting new enhancements. Several cyberformances are being prepared to launch and showcase v3, and a networked discussion event between Munich and Wellington will investigate and reflect on the concept of cyberformance. As well as these events – all free for you to join online from wherever you are in the world – there will be a planning meeting to address the ongoing sustainability and future of UpStage.

But first UpStage need your help – surprise with your donation!

Stillgraphic The birthday celebrations on 9-10 January 2014 will include:

- the launch of UpStage version 3, incorporating audio-visual streaming and many exciting new enhancements;
- several cyberformances (details to be announced);
- a networked discussion event between Signalraum in Munich and Wellington, exploring the theme of “collaboration” within the context of cyberformance; and
- a planning meeting in Wellington, to discuss a sustainable future for UpStage.

You will be able to join all of these events and activities online from wherever you are in the world. 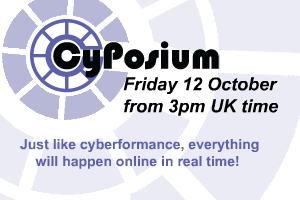